Rocket Ride Recordings is an independent record label and production company with a unique vision of bringing honesty, integrity and soulful music to the people. Our goal is to be a cooperative launching pad for musicians and producers who have an original approach to composing, performing and recording music. Currently those artists and projects include: Dean Grech, Sherry Weisman, Brynn Fyler, Koko Powell, and Kellie Blaise.

Rocket Ride Recording artist, Dean Grech's "What Do You Want This Year for Christmas" (Ashley/Grech) is slowly becoming a holiday classic, as it was recently added to the Universal Records Japan holiday compilation disc, "Free Soul". We are very proud to be amongst the ranks of: John Lennon, Stevie Wonder, The Jackson 5, Gladys Knight, Herbie Hancock....


Rocket Ride Recordings is pleased to announce that RRR artist Dean Grech's latest single "We Got Lost" topped the Billboard Charts for the most added song. We are very excited, as this number one ranking came about only three weeks after the release of the song. 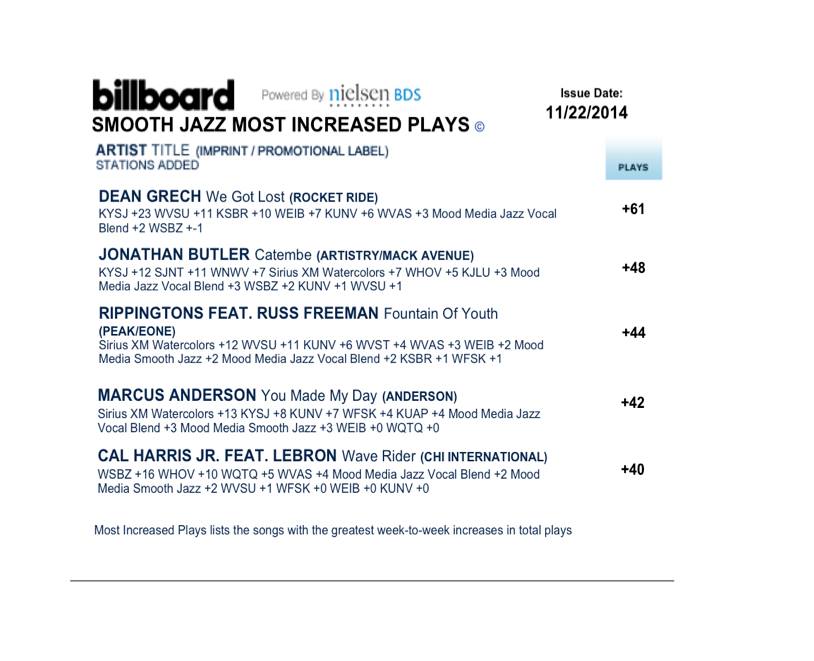 Please be on the lookout for Dean Grech's forthcoming album, "We Got Lost" available March 1, 2014. You will find "We Got Lost" on iTunes, Amazon, and CD Baby.  The preliminary response has been amazing and the reviews have be nothing short of spectacular. See below:

We Got Lost by Dean Grech – reviewed by

More than four years have passed since the release of guitarist/vocalist Dean Grech’s first album “Look Out”.

Looking at the covers of that album and the new record “We Got Lost” should have given me a clue to how much the spotlight has switched from guitar to voice.

The opening song “Shake it Around” with its irresistible groove, snazzy horns and 70’s style chants would not have given me a clue, nor would the blissful samba “Playa Rosa”.  Not only is the acoustic guitar to the fore in the latter song, the flute and percussion are a jazz fans’ delight.  I’m personally in familiar territory listening (and grooving) to the instrumental “Let’s Go” and I defy any jazz fan not to be drawn in by Hans Zermuehlen’s gorgeous Hammond B3 and by Greg Vail’s gutsy alto sax solo.

I hope, and expect, that NAC stations will pick up the lilting “Wishing You Were Here” with its relaxed atmosphere, whispers of acoustic and electric guitar and wispy female background vocals.  Comparisons will similarly be drawn with Peter White’s sound on the haunting “Love Song”, where the female background vocals are complemented by Greg Vail’s lovely soprano sax.  I should mention that this is the only song on the album which Dean did not write or co-write.  The bebop number “Altercation” is the most straight-ahead song on the album and again that rockin’ Hammond B3 shares centre stage with Grech’s own warm-sounding semi-acoustic.

In my review of “Look Out”, I expressed admiration for Grech’s vocal style and he showcases the many things his voice can do on this record.  The funky title track features that voice, with a tone so reminiscent of Michael Franks but with a rasp that takes it to a different place.  I had to sit up and take notice during the opening bars of “Nothing More”, which made me think instantly of Everything but the Girl.  It should do fabulously well on radio with its insistent groove, repetitive chorus and slightly ethereal atmosphere.  I spent a large part of the 1980’s listening to Matt Bianco and “You Don’t Know me Well” brings back great memories of that sound – and that time.  The acoustic guitar touches are pretty but they are secondary to that smoother-than-smooth vocal.

“I Don’t Think So” has a bleaker feel than the other songs on this record and Grech sings in such a high register and with particular phrasing that I actually thought of British singer Sade.  It’s startling – and I like it – but I had to listen a couple of times.  Some fabulous musicians have been identified as much with their singing as with their playing, and “Feeling I Can’t Undo” brings to mind Chet Baker.  It’s a lovely song because it’s steeped in jazz and it allows Grech to bring two considerable talents together with no fuss, no drama – it’s a really classy tune.  At various points on this record, a love for latin music is evident – and nowhere moreso than on the sexy “Suddenly”, which again is radio-friendly and catchy.  If Michael Franks recorded this next week, he’d have a hit with it.

This is really two reviews in one, because this is really two albums in one.  It’s clever, because elements are instantly recognizable from “Look Out”, but existing fans are really taken on a journey as a great guitar player spends much longer in the vocal booth for “We Got Lost”.

"If you can’t stand boredom, this new release, We Got Lost, from vocalist/guitarist Dean Grech is just for you.  Loaded with soul, diversity, and charm, the CD truly beckons you.

The project features saxman Greg Vail and includes some really strong contemporary jazz/R&B with a couple of straight-ahead offerings and even a taste of Brazilian rhythm (“You Don’t Know Me Well”) to top it off.

The overall CD is solid in every area – lyrics, arrangements, sax, guitar, bass, and drum work.  It has texture and a way of gripping you in its satisfying appeal. I found myself riveted as I listened to how well-produced and arranged the album is, as Grech smoothly transitions from one track to the next.

From the opening notes of the lead track, the rousing “Shake It Around” to the mid-tempo title track (which, by the way, resembles the soulful styles and rhythms of many of our earlier icons like Earth, Wind, & Fire. David Paich, and Boz Scaggs) to the previously mentioned Brazilian feel of “You Don’t Know Me Well” to the Sade-like “I Don’t Think So” (check out the bass line and melody, and you’re there).  This one has some really deep lyrics, as well. The song directs our focus to the state of our planet (“Our most basic common link is that we all inhabit this small planet; we all breathe the same air, we all cherish our children’s future, and we are all mortal. Together, we shall save our planet or together we shall perish…”). Love it.

Then, there’s the straight-ahead vibe of “Feeling I Can’t Undo,” a touch of reggae on “Love Song,” and the big band feel of “Altercation,” just to add more variety to the mix.

A very well-done project indeed — one that should make most C-jazz fans proud to be associated with a genre that can make eclecticism as much a part of the C-jazz dialog as anything else.  Give this one your undivided attention."

Rocket Ride Recordings is pleased to announce that "Two Strong Arms" written by Reggie Ashley and Dean Grech will be featured in the upcoming film, "What'swrong with Virginia"  recently ,retitled "Virginia", staring Ed Harris, and Jennifer Connelly. The movie will be released in the fall of 2011. The song features Dean Grech's vocal stylings. "Crazy Dreams", an instrumental composition, written by Reggie Ashley and Koko Powell, will also be featured in the film.

If you’re not familiar with the playing of guitarist/composer Dean Grech – and I wasn’t before this album appeared at my house – I’m going to steer you to Dean’s website. If you’ll pardon me, I’m going to get into some great guitar jazz…

Anyone who’s been steeped in contemporary/smooth jazz for the last 15 years like I have will be seduced by the lazy pace of ‘Sunset’. The relaxed drum and percussion track leaves Dean lots of space to trade licks with Eric Marienthal and this song unfolds just right – just the way you want it to. Rick Shaw’s fretless bass sets the tone for the slightly offbeat ‘Funky Talk’, which is another chilled-out track and features Marienthal on tenor sax this time. Grech’s solo spans the chord changes beautifully – I already love his semi-acoustic tone, so I’m hooked.

‘Bumpin’ on 2nd’ shows Grech’s love of Wes Montgomery’s style – and if you’ve enjoyed two decades or more of Lee Ritenour’s music, especially the more straight-ahead outings, you’re going to dig this! As I grew up listening to Alan Haven, the organ solo on here delights me. Now, now, now – Mr Grech has got a bluesy voice that accompanies his bluesy guitar so, so well on ‘Take my Soul’. I’m sure that when I first listened to this CD weeks and weeks ago, I scribbled ‘Jamie Cullum’ as a shorthand to describe Dean’s tone. Andre Carney’s muted trumpet solo makes cold rain fall on a dark Manhattan street and our hero walks back to his empty apartment – get the idea?

‘Look Out’ is a lovely, swinging straight-ahead jazzer. Guitar and horn lines double on the verse and then Grech just blows, blows, blows. Increasingly I’m digging contemporary jazz albums that have players going back to the music’s roots. If your toes aren’t tapping, call for an ambulance! Acoustic bass and smoky tenor sax set the scene for the bluesy vocal ‘In Love Again’ – now this must have been when I scribbled ‘Jamie Cullum’. An original, classy composition which should be all over the radio – especially in the UK, where BBC Radio 2 should be championing this and other songs from this set.

The only non-original composition here, ‘Shadow of your Smile’, is played on acoustic and it’s utterly haunting. If a major TV channel gets Dean Grech on its screens and asks him to play this, the phones will be red hot the following day – I guarantee it. On the vocal ‘It’s Over’, Grech’s voice reminds me more of Michael Franks (again, a very good thing) and while the mood stays muted, the lovely guitar solo is on point.

I’m always impressed when sax and guitar lines are laid down side-by-side and it works well on the groovy ‘I Don’t Believe’. This is a real jazz tune, but there’s no showboating – for me, it represents what I’ve always loved about jazz. Scott Martin’s tenor sax solo is note-perfect, I mean note-perfect. If there’s a single from this album, ‘Everything’s Going My Way’ has to be it. It’s a gentle samba with great vocals and some sweet hooks in there.

Things stay sunny with the upbeat vocal ‘Seasons of Love’. We have the elegant simplicity of jazz trio with the addition of Hans Zermuehlen’s lovely piano tone, about which I’ve said little until now, but which I’ve hugely appreciated since the first bar of the opening song. The cynical lyric on the riff-heavy ‘Sacred Father’ will make you smile. This must work well live as it uses some very sassy brass, rhythm guitar and background vocals to underline the point. Blues fans, get ready to lap up ‘I’m a Sensitive Man’. The vocals and Eric Clapton-style picking are delivered with wit and I can’t help feeling that the tongue is kept firmly in the cheek throughout. It’s a great closer to this set – and I’m guessing to Grech’s live set also.

What have we heard then? A great guitar tone, turned to blues, funk and varying shades of jazz. We’ve heard some clever songwriting and some confident and hip-sounding vocals. The production is classy too – there is no point where it feels like “hey, I’m gonna make a guitar-players album”. This record is for everybody – it’s going to make a lot of friends.   Chris Mann 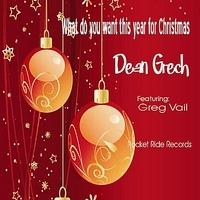 November 22, 2014
Rocket Ride Recordings is pleased to announce that RRR artist Dean Grech's latest single "We Got Lost" topped the Billboard Charts for the most added song. We are very excited, as this number one ranking came about only three weeks after the release of the song.